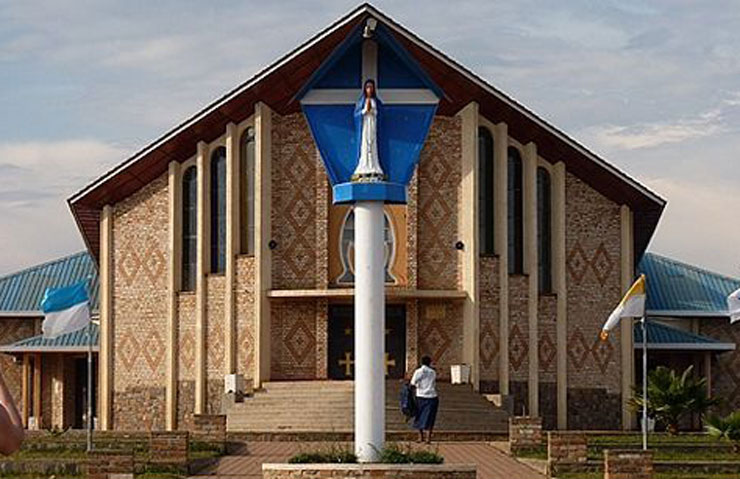 Kibeho Catholic Shrine Pilgrimage which is also known as shrine of our lady Kibeho, is a famous isolated place nestled on a hill in a small town of Kibeho, Nyaruguru district which is found in the southern province of Rwanda, about 189 kilometers from the city of Kigali. The Place can also be reached after about 74 kilometers from Nyungwe National Park which is known as an ancient largely preserved tropical and montane rain forest that homes a number of primates species.

Kibeho catholic Shrine Pilgrimage is mostly famous in the catholic region which has a large population in the country, it is considered as a holy place of apparitions and pilgrimages, where thousands of believers from all over the world pilgrimage to this site for blessings. Kibeho catholic shrine was recognized to be a holy place starting from when notably three girls reported appearance of the Blessed Virgin Mary- the mother of Jesus Christ in visions that occurred from 1981 upto 1989.

The visions reported by these teenage girls who were studying from Kibeho College included the apocalyptic ones of dark sights, rivers of blood and slain heads of people which many believe were foretelling the dark past experience of the 1994 Rwanda genocide against Tutsi, that even stretched to the church that was behind the college, it was burnt down by the Hutu men and over 28,000 people are said to have lost their lives from this place that was to be a safe heaven. The Catholic Church sanctioned those apparitions and they were declared authentic in June of 2001 by Vatican and since then Kibeho Catholic Shrine is a sanctuary that has become a place of pilgrims.

Many Rwandans, and other people from all over Africa and other countries in the world always pay their visit to this sanctuary especially thousands of them come to celebrate the assumption day, which happens every year in Rwanda on the 15 of August. On this day it is believed to be a day of blessings through a sign of the rains that falls every year on this day regardless of the weather conditions. However Kibeho Catholic Shrine Pilgrimage is every day open for all visitors.

You can choose to visit this holy place and get to learn more about religion, the history of the place as well as a deeper insight about the apparitions that were received by the three ladies, you will get a chance to meet one of the visionary girls who is named Nathalie Mukamazimpaka who still stays at Kibeho church, was able to survive the Genocide and she takes you through most of the stories about the apparitions.