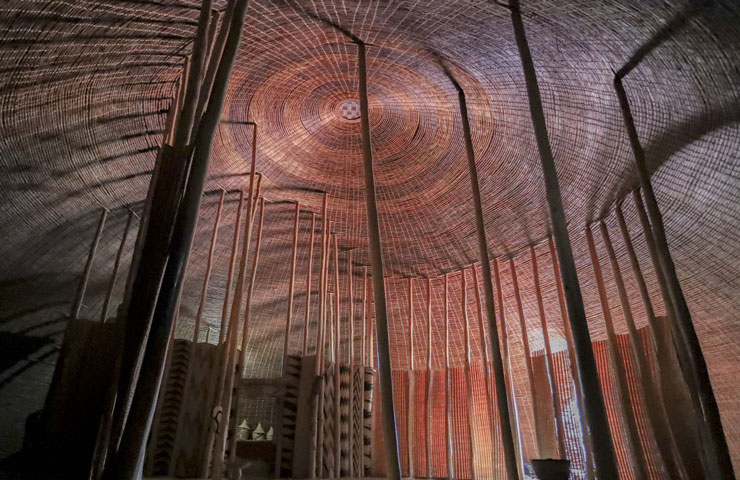 On the road to Nyungwe National Park, 88 kilometers away from Kigali city, in Nyanza district – southern province of Rwanda, lies the beautifully crafted King’s Palace Museum. The palace represents the Rwandan traditional system of monarchy that was abolished in the early 1960’s due to colonialism. In old times this place was the residence of King Mutara Rudahingwa III, a reconstruction of the original structure for Rwandan kings royal residence in a circular bee hive shape with traditional thatching’s was restored in the 19th century as a replica.

On your visit to Kings Palace museum, you will have a fascinating tour inside the grass thatched royal residence that will amaze you on how beautifully crafted it is, have an insight about how king’s lived and ruled back in the days. Among the activities that would happen at the king’s palace are beer and milk production, listen to the stories of how it was supposed to be a virgin boy responsible for the beer production house and a virgin girl for milk production house, you will tour around these traditional houses, see the equipment’s they could use and learn the rituals of how the beer and milk meant for kings was made and this will leave you in total excitement.

Behind the palace live a few long horned Inyambo royal cows, which were recently reintroduced at the palace replica. These cows were initially a symbol of the King’s prestige and they would come from the king’s herd, their keepers performed a unique royal tradition of carefully tending and singing to them to keep them alive since they played an important role in the palace.

During royal ceremonies, these royal cows from the ankole breed would be paraded before the king in his honor being decorated with expensive jewelries. They would listen to the keeper’s songs and follow his movements while on a royal parade. Inyambo cows form an integral part of the Rwandan culture and though the monarchy system ceased, their breeding and raring is still carried.

Alongside the royal Kings Palace Museum replica, there is modern palace building where King Rudahingwa used to stay with his wife until he passed on and it serves as displays of various facts about the palace and Rwandan history from the 15th century. Tour around the building including what was the king’s room, see his original bathtub, the queen’s room, the traditional cave which was used as a fridge, the royal spears that would be used and have an insight about other interesting facts such as the ivory materials that were gifts to the kings brought by Europeans from different countries.

A visit to Kings Palace museum in Nyanza will give you great moments of learning about the Rwandan history about the past kings leadership and will totally change your perspective on various things. And you can also enjoy traditional performances of Intore dances and songs which are delightful.

It takes only one hour to drive to Nyanza for your cultural experience at the palace or you can make an en-route visit to King’s palace museum while heading to Nyungwe National Park. Do not forget to also visit the Mwima museum on the neighboring mwima hill a few meters away from king’s palace museum, that houses the tombs were King Mutara Rudahingwa III and his wife queen Rosalie Gicandaad and King Kigeli Ndahindurwa IV were laid to rest.

Not far beyond after Kings Palace museum in Nyanza, you can also visit the Ethnographic museum situated in Huye town, another interesting museum that offers a display of some of Africa’s finest ethnographic collections which will give you a deeper insight about the rich culture of Rwandans.