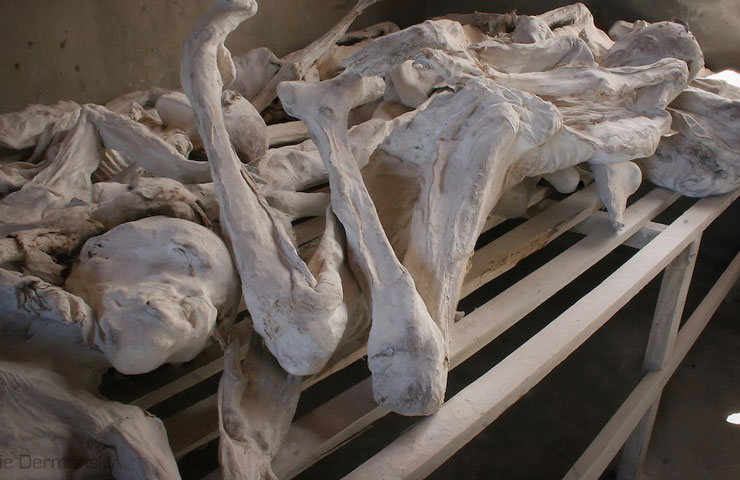 The Murambi Genocide memorial site is one of the six general genocide memorial grounds in Rwanda that serves to commemorate the 1994 Rwanda genocide. The memorial is located 126 kilometers from Kigali city in Nyamagabe district found in the southern province of the country as you are heading to Nyungwe National Park, the ancient primeval and interesting tropical rainforest.

Murambi Genocide Memorial site which was created in 1995 was formerly a technical school where the Tutsi during the time of genocide that had sought protection from a local church were lured to go hide at this technical school which is now the Murambi memorial site, being assured they would be protected by the French troop that had a military camp there but instead were trapped into massacre and killings.

This Genocide Memorial site of Murambi is among the places that had many killings of the Tutsi people, over 65,000 people had travelled to hide on this site and 45,000 victims were murdered from there after being denied food and water for many days by the French soldiers and later killed by the Hutu men. The remaining people that tried to escape were also killed the next day from the nearby church where they had ran to. It is believed that only 34 people survived from the massacre from this memorial site.

Visitors can visit the cemetery where more than 50,000 victims were laid to rest, they are also able to see the several pits where many other thousands of victims were buried after they were killed, it is told that the French soldiers after the killings happened, they came and dug several pits and threw the victims’ bodies there and they then put a volleyball pitch with a French flag raised so as to hide what had happened there.

After your Nyungwe National Park adventure safari for Chimpanzee Trekking, Canopy walk, Colobus Monkey encounters, Nature walks that include waterfall hikes among others, you can choose to have an enroute visit to this Murambi Genocide memorial site to have an insight about the historical facts of what happened during the 1994 Rwanda genocide. A great experience that will compliment to your knowledge about Rwanda as a country and how it has managed to overcome this dark past experience.