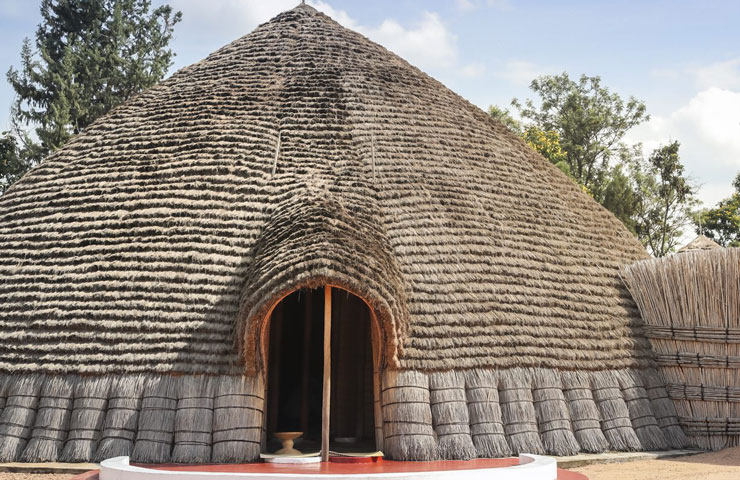 Nyanza town is located in Nyanza District in the Southern Province. Nyanza town is also the provincial capital of the Province. Nyanza is a “bantu” word meaning lake, which probably refers to the small body of water created by a dam to the west of Nyanza town. The district lies between Muhanga city in the centre of the country and Huye city in the south straddling the main road Kigali to Bujumbura, the capital city of Burundi and to Bukavu city in the Democratic Republic of Congo via Nyungwe rainforest.

The palace of the last Umwami (Traditional King) of Rwanda (King Mutara III Rudahigwa) who reigned from 1993-1959 is located within walking distance of the town center and is the town’s main tourist attraction. From the palace one can see the traditional king living arrangements and the modern palace built for the king. A Rwandan women sculpture dressed in an “Umushanana” (Rwanda’s silky flowing traditional dress) guides the visitors through the palace. The highlight of the tour is the unusual Inyambo cattle, known for their enormous heavy horns. Visitors can touch a cow and have their picture taken with the cow while a traditional herdsman sings for the cow. There is a large covered outdoor restaurant and coffee shop overlooking the garden in front of the modern palace of the king.

Art museum is another tourist attraction which is currently in transition to another type of museum. Currently that museum has a children’s art room and many photographs of Rwandans and Rwandans life. Both the art museum and the king’s palace have parking lots, restrooms and small gift shops selling Rwandan crafts products. The town has number of Hotels and Motels located in the city center that serve for relaxation restaurant and accommodation to tourists en-route from or to Nyungwe National park, a home to primates like chimpanzee and colobus monkeys