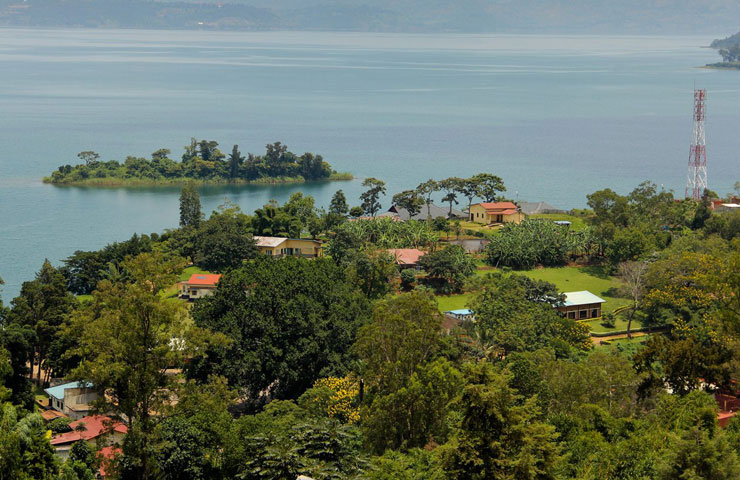 Rusizi district with its small town on the border with the DRC, with views across to the Congolese city of Bukavu. Rusizi District is one of seven districts of the Western Province in Rwanda and it is divided into Rusizi District borders with the Republic of Burundi in the south, and the Democratic Republic of Congo in the west. The district lies at the southern end of Lake Kivu, where it empties into the Rusizi River (after which the district is named). Rusizi’s capital, Cyangugu, is one of the three major Rwandan lake ports of Lake Kivu (along with Karongi and Rubavu) Rusizi Town borders with the much larger  city of Bukavu in the Democratic Republic of Congo.

The district also contains the western half of Nyungwe Forest, which is an impenetrable forest, a popular tourist destination, being one of the last remaining forest areas of Rwanda and home to chimpanzees and many other species of primate including colobus monkeys, mangabey monkeys , velvet monkeys. The Nyungwe National park is known as the birding paradise as we have almost 300 species of birds including the Albertine endemic birds like blue turaco.  Rusizi town is the closest town to Nyungwe National Park, which is about an hour’s drive away; this gives chance to tourists who are either going or back from visiting Nyungwe National Park to have a night stay in the hotels in Rusizi. When you are in Rusizi town you can easily connect by boat to Idjwi Island which is part of Southern Kivu Province in DRC.

Rusizi district is known to host some good hotels like Kivu Marina Bay managed by Menthis collections. We have the Emeraude Kivu resorts, all the hotels are on the beach of Lake Kivu, where it is easy to enjoy the boat trip within this lake.